Last year tellows Study I explored the most communicative countries according to our database, in which Colombia, USA and Mexico took the lead out of 50 countries. In 2019, tellows Study II aims at sharing our latest information of the most reported caller types in countries within Europe, Asia and South America at tellows’ platforms. Alone in the UK, almost 30% of the callers’ type are reported as harassment calls. Surprisingly the most noted caller types actually differ from country to country, let us check out the content below!

Firstly, it is important to mention that the study focuses on the different caller types that our users select, when they report certain numbers. Every caller type indicates the purpose of the call for every number. The caller types help our users to figure what kind of call is expected.
For this purpose, taking into account countries with the highest number of tellows users such as Germany, Italy, United Kingdom, France, Brazil, Indonesia, etc; we have developed a comparison of caller types both domestically and internationally, which will be presented through a chart and a table below.

UK users are disturbed mainly by Harassment and Telemarketers Calls

In the UK, there are more than 400.000 monthly users who share information of various telephone numbers. The chart below shows how numbers are categorized by our users in different caller types. As you can see on the chart, most of the phone numbers were reported as harassment calls with the total percentage of 29%. Following harassment calls is the caller type “telemarketer” presented with the brown colour on the chart. Apparently, 22% of the numbers that have called our users seem to belong to telemarketers. Debt collection company also shows a high percentage with 15% of the whole chart. Sweepstakes/lottery has the smallest percentage with a total of just 1%.

In conclusion, most of the numbers apparently carried out harassment calls in the UK. These harassment for sure have different purposes. There is also still a problem of unsolicited telemarketing calls received by many users.

Global caller types – Reports for unwanted calls based on countries

The bar graph below illustrates the most popular caller types in 9 countries, in which tellows has a high number of users. We took six caller types that are most frequent reported at tellows. However, you might notice that every country has different percentages of the caller types. 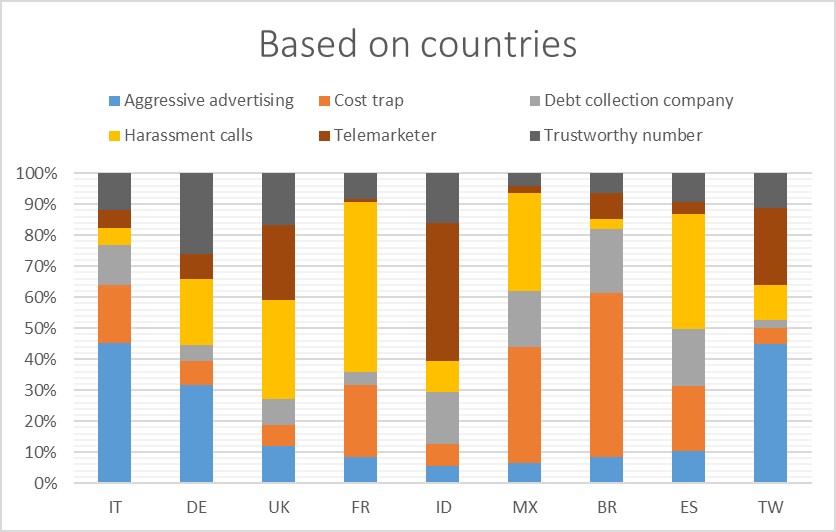 European users are dealing with aggressive advertisement and harassment calls

In general, there is evidence that European users, who comes from Italy and Germany, receive mainly calls related to aggressive advertising. In fact, 43% of the total calls received by Italian users are reported as aggressive advertising, while for German users 26% of calls are reported within this category.
Moreover, users from UK, Spain and France, receive mainly harassment calls. Indeed, France has the biggest percentage of harassment calls with 52%, followed by Spain with 36% and UK with 29%. On the contrary, harassment calls are not a big problem in Italy, with just around 5% of the numbers.
Taking into account the results of all countries, it is interesting to mention that France takes the first place with highest level of harassment calls and Italy takes the first place with highest level of aggressive advertising calls.

In contrast, harassment calls are not a big problem in Asia. Instead, a big amount of calls received by the Asian users, who comes from Indonesia and Taiwan, are linked to telemarketer calls. Just like in the UK, telemarketing is also a big issue in Indonesia with around 40% of the reported numbers. In fact, Indonesia is the country with the highest level of telemarketer calls comparing with all the other countries mentioned in this study. Besides, although users from Taiwan are receiving telemarketer calls, they are facing a bigger problem with aggressive advertisement like in Italy and Germany, reaching 31% of reported calls.

On the other hand, comparing two countries from Latin-American, Brazil and Mexico, it is deduced that American users are likely to receive cost trap calls, meaning that the callers aimed to steal the users’ money with different kind of ways. Brazil is the country with the highest level of cost trap calls with 48% of the total calls, followed by Mexico with 36%. Taking into account the results of all countries, it is interesting to highlight that Brazil takes the first place with highest level of cost trap calls.
Just like UK, Spain and France, Mexico is also dealing with a big amount of harassment calls, in fact, 30% of the reported numbers are related to this type of call. On the contrary, harassment calls are not a big problem in Brazil.

The purpose of tellows is to protect our users from any possible telephone spam or frauds. Thanks to the reports and ratings of various numbers from our users, we can provide you with the information you need when you receive a call from an unknown number. Based on the tellows study above, it can be concluded that all countries have different issues. However, most of the numbers have a negative tellows score that represents the danger of the number. By reading and writing reports/ratings at tellows, you can protect yourself and other people from any possible dangerous calls.
As harassment calls are a big issue in the UK, tellows would like to provide you a solution to the never-ending spam calls. In case you haven’t heard, tellows offers different kinds of solution for protection against harassment calls. If you are constantly called by unknown numbers that seem to be spammers on your mobile device, you can easily install our “Caller ID & Block” application on your phone to automatically block spam and even scam numbers. For landline solution, you can try out the tellows scorelist for Fritzbox. Lastly, if you need tips & tricks to protect yourself from any types of phone frauds, check out the 2nd edition of the tellows informative magazine!