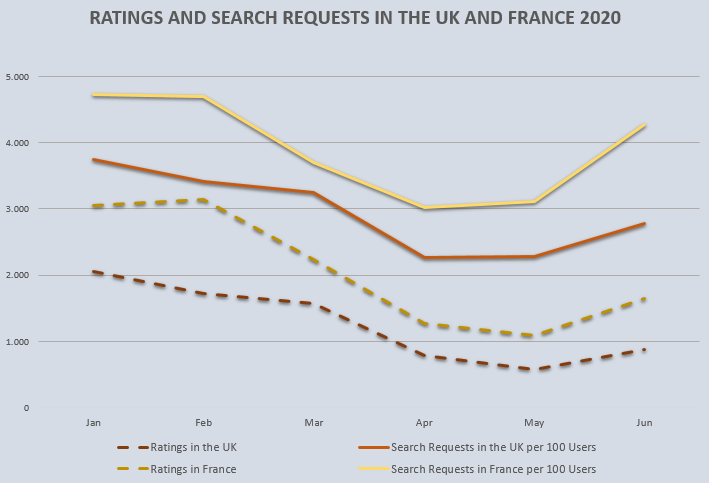 Search queries usually increase in March compared to February. This year the lockdown took place in mid-March, which is reflected in the decline of search queries. Phone number searches had a huge drop in April in the UK. From June, for the first time, more searches for phone numbers could be recorded, which can be attributed to the loosening of restrictions that has brought many companies back to everyday work.

In France the searches and phone report behaviour is very similar to the UK, but had already a deep impact in March. Comparing February with April the searches dropped by 20-30 % and the reported numbers dropped by over 50 %.

The trends are also very easy to reproduce in other countries. While in Europe, such as UK, France and Spain, the number of searches for telephone numbers fell in March, in Asia, e.g. Taiwan, the number of search inquiries increased again at the beginning of the year, as the virus lead to restrictions weeks earlier and accordingly loosened earlier.

In the USA, on the other hand, restrictions only gradually came about, but these continued to apply due to the severe illnesses and deaths. The graph of Mexican searches shows the same trend as the USA. In Brazil, searches fell in February due to the carnival and holiday season. However, when the virus spread widely in March and April, the rate of search queries continued to decline.

We have published our annual study 2019 with the user activity on tellows in general and show you the number of ratings for telephone numbers worldwide.

Covid fraudsters are on the lookout

Anyone who thinks that there were no unwanted calls during the lockdown and pandemic period is unfortunately wrong. On the contrary, calls from scammers have continued to be reported. The situation was exploited to gain access to new tricks related to the virus. We presented to you the dangerous behaviour at the beginning of the Covid pandemic. Even if there are currently no longer any bottlenecks with protective clothing or relief supplies, these practices are still dangerous and occur occasionally. Please inform family and friends to point out the shady calls. The fear that the callers spread often leads to insecurities and misconduct, which can guarantee great financial damage.

What unsolicited phone calls did you receive during the crisis and how did you deal with them? Write us in the comments!

Further protection for your mobile is provided by the tellows smartphone app. Caller ID, reverse search, ratings and blocking of unwanted calls available for your phone. Download now for iOS and Android for protection on the go.