tellows works as a team with our platform users. We strongly believe that „sharing is caring“ and we trust our users in true information about unwanted calls. With this informative post, from tellows we want to inform you and help you stay protected from the different types of spam and scam calls existing (…)

What are spam calls and when they can be dangerous? 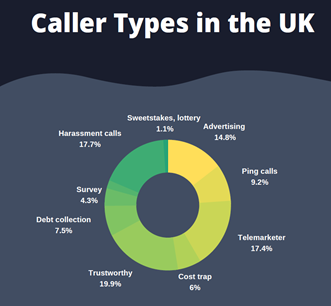 Spam calls are annoying and unwanted calls, usually without authorization from the person who receives them and whose content contains irrelevant or inappropriate information. It is important to know that these types of calls, apart from annoying ones, can be dangerous since many of them are intended to commit a scam. During the year 2019 alone, tellows received more than 934.353 ratings and comments reporting possible spam / scam phone numbers.

The threat that this type of calls represents is real, as shown by the statistics obtained for the United Kingdom during the year 2019.

In tellows we attach great importance to the protection and security of our users, so thanks to the active members of our community and their assessments, we have prepared an annual report that collects data from January to December 2019.

If you want to know which are the top countries affected by annoying calls and what type of calls these are, as well as where in the UK users are most active when reporting spam calls, you can check our tellows Annual Report 2019.

What kind of spam/scam calls can we get?

Today the possibility that many of us become victims of telephone fraud and annoying and unwanted calls is very high. Scammers use different tricks and innovate when it comes to getting your personal data and private information. From tellows we support you in the fight against unwanted calls and we want to help protect you against them, that’s why we explain below the different types of fraud that scammers can use to get your personal information.

Even if you have never gotten one, you have probably heard about this type of loan. Sometimes when money is needed immediately, some persons may use this type of loan that can do more harm than good. The online payday loan is characterized by having a very short term and your request can be specified in a matter of minutes. Once the loan is approved, the funds will be deposited in the applicant’s bank account that has been previously verified. The negative part of this loan is the high interest rate that comes with your return and the large amount of personal data that is needed. That is why these types of loans can become dangerous and lead to a scam to those who get them. Many scammers pretend to be legitimate loan companies and get in touch with consumers thanks to the data they get from real online loan applications.

As an example, in December 2019, a family from London applied online for a payday loan that was approved by the alleged company. The loan consisted of an amount of 10,000 dollars but the applicants had to pay an additional amount because they had bad credit record. The money never reached their account and the company did not contact them again or answer their calls.

Normally the phone rings once and the person who contacts you leaves a message telling you that you should call them back because they have something important to tell you, a family member has had an accident or even that you have won a prize. If you decide to call back this number you will receive a large charge, which would be even higher if it is an international call. It is also possible for the scammer to extend the call to increase the cost significantly by playing background music and leaving the call on hold. The call back scam is also identified with the one-ring scam or Wangiri. If you If you want to know more details about this type of scam you can check our  tellows blog.

During the year 2019, Australia was attacked by a wave of such calls. Numerous victims began to lose money when returning missed calls, being left on hold for a long time and charging them a premium rate.

This type of scam usually affects the unemployed, students or people with low incomes. The scammer contacts the victim by offering a study program with the promise of a future job. Frequently the fraudster will ask you for numerous pieces of personal data to proceed with the application including your bank account details or ask you to fill out an online form. Sometimes to access the job you will be asked to pay a small amount in advance.

On 1st of January of 2020 a woman from North Carolina a woman was scammed by accepting a promise of false work. She lost $ 8600 after receiving checks from scammers who told her to deposit them in her bank account. The victim used her personal money to buy gift cards while waiting for the funds to arrive and provided the scammers with the code for those cards.

Not all calls from phone vendors are planned to scam consumers, but some of them can be dangerous if not detected. These types of scammers will put you under pressure and will require personal or bank information even though you are not buying anything. Other types of scammers will ask you to pay a fee or buy something to increase your chances of winning a prize. Charity fraud is also used by telephone vendors, who claim to be part of a non-profit organization and that encourages you to make a donation. Scammers can also call you by offering a subscription to a magazine with which you have no affiliation and offering you an annual subscription to that magazine in exchange for a small advance payment.

In October 2019, the Phoenix police arrested 12 people responsible for committing this type of fraud, with more than 9000 victims, all of them over 65.
The scammers pretended to be telemarketers with the promise of big profits in exchange for a monetary investment.

These types of scammers use valid numbers that are not their own with the purpose that the victim cannot know their location before stealing their personal information. They will claim to belong to a legal business or to an innocent party.

Manchester police have warned of a telephone fraud in which the scammer calls the victim posing as a police officer and tries to get his private data and personal information.

The scammers will call to claim a reimbursement check from the Payment Protection Plan, which is a services that insures you of the possibility that you cannot pay your credit card in case of death, disability or unemployment.

These types of scammers get in touch with people who don’t make the claim to the companies themselves and will ask them for personal and private details.

During the month of December 2019, Lincolnshire police warned people about a massive PPI phone scam that requested coupons for Amazon, Steam and iTunes.

The scammer claims to belong to a legitimate organization such as a bank or a telephone company to get the victim’s personal data such as name, birth date or bank information. They will contact the victim through an automated system and will create situation of urgency for the victim to make a quick decision and provide private information.

The HDFC bank issued a warning last December about a possible vishing situation. The scammers pretended to be representatives of the bank offering relevant information for the client in exchange for their private data in order to drain their bank accounts.

The scammers impersonate Microsoft employees and claim that the victim’s computer has been infected by a virus, providing a continuation of a series of instructions to download an antivirus. During the process they may ask you to subscribe to the program or to provide them with private data such as the bank account number.

Last December a couple was arrested for carrying out a technical support scam claiming that the victims had problems with their computers. The scammers sent fake viruses and pop ups to the victims and then charged them for repairing an inexistent problem.

The scammer will contact you asking you to quickly answer a question and say that in not answering you will lose your winnings. He will also ask you to keep is as a secret and to pay a fee necessary to obtain your prize or personal data that they claim they will need to be able to send the prize.

In December 2019, the Michigan lottery warned the population about a scam in which fraudsters contacted victims claim they had won a lottery prize, but to receive it they had to pay a fee. Once the money was obtained, the scammers contacted the victim again asking for an additional amount.

The scammer will contact the victim by phone or email offering the possibility of pension liberation fund before the age of 55 years. This type of action is illegal and scammers will normally invest your money abroad in high-risk investments.

In August 2018, more than 250 victims lost £21000 due to pension liberation fraud, destined to investments by scammers.

How to stay protected? 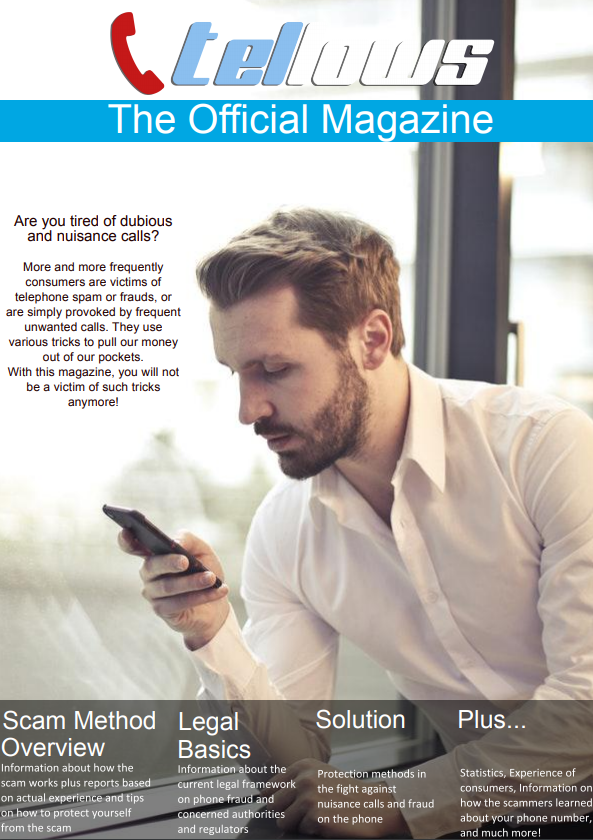 If you want to protect yourself from unwanted calls and identify who is calling from the first time your phone rings, tellows is the solution!

In tellows we care about your safety, that is why we advise you to download and read our Magazine where we have collected information about the different methods of telephone scam and we offer you a series of tips to protect yourselfes you the option of blocking unwanted calls.You also have information regarding how to report and who to report if you are a victim of any of those scams.

Do not forget you can also download our app available for both Android and iPhone that not only allows you to know who is calling, it also gives you the opportunity to block unwanted call, search for numbers and get useful information about them and leave comments and ratings about the different phone numbers in order to helps others.