According to the world renowned cyber experts RSA, in 2012 UK consumers lost more money to online fraud than any other country. The RSA Anti-Fraud Command Centre (AFCC) released figures of a £405.8m loss in the UK for 2012 which was gained from 250 000 phishing attacks.
For the UK, this resulted in a 25% increase from 2011. The top five countries, which have a significant English speaking population, are as follows. US are second even though there loss was a decline of 19%. Canada, India and South Africa make up the rest.

An annual lost to the UK through cybercrime was estimated at £27bn by Detica-BAE Systems. From this £27bn, £21bn is believed to come from businesses.

The cost to consumers is equally catastrophic. Detica believes that a total figure of £3.1bn has a more encompassing scope than RSA. Fake antivirus packages and ’scareware‘ cost the consumer around £30m.

However, one must use caution when using estimations of cost as previous usages have been exaggerated wildly. However the RSA’s figures are based on attacks detected and dealt with by its AFCC. The attacks are then given the value of $300 per attack as this is the average from 8 years of operations, with 500 000 incidents tackled in this time. Detica’s totals use analysis from 25 industrial sectors and consultation with five British government agencies.

Due to the widespread use of chip-and-pin technology and other multi-factor authentication, the UK population are less at risk than those in the US.

Limor Kessem, Technical Lead of Knowledge Delivery at RSA believes that the UK are targeted due to an increase in technology for the average person. She said „The problem with the UK is that more people use the internet, more people have technology“.
The Office for National Statistics released figures last week that show that 84.7% of the UK public have used the internet at least once. In comparison, the US has a figure of 77.9%. In addition, the UK has the most usage for internet access from mobiles which increases the risk of attack.

New tactics are constantly being evolved by potential fraudsters to rid you of your money. For example, online fraudsters often require an individual, or an ‚insider‘, to reside in the country of the target. This is in case attendance at a bank is required and in this sense the fraudster can impersonate the target. „It’s partly because of the accent. You have to sound like a local if you really want to make sure the transaction goes through“, said Kessem.

Highlighted in a 2012 UK Cards Association report on payment fraud were methods that a potential fraudster might carry out in-branch. The theft of a card at an ATM, or tricking individuals into revealing their card and PIN by posing as a telephone salesperson have been used in the past.

Issue: You receive an error message saying that the tellows app does not have access to your contacts. 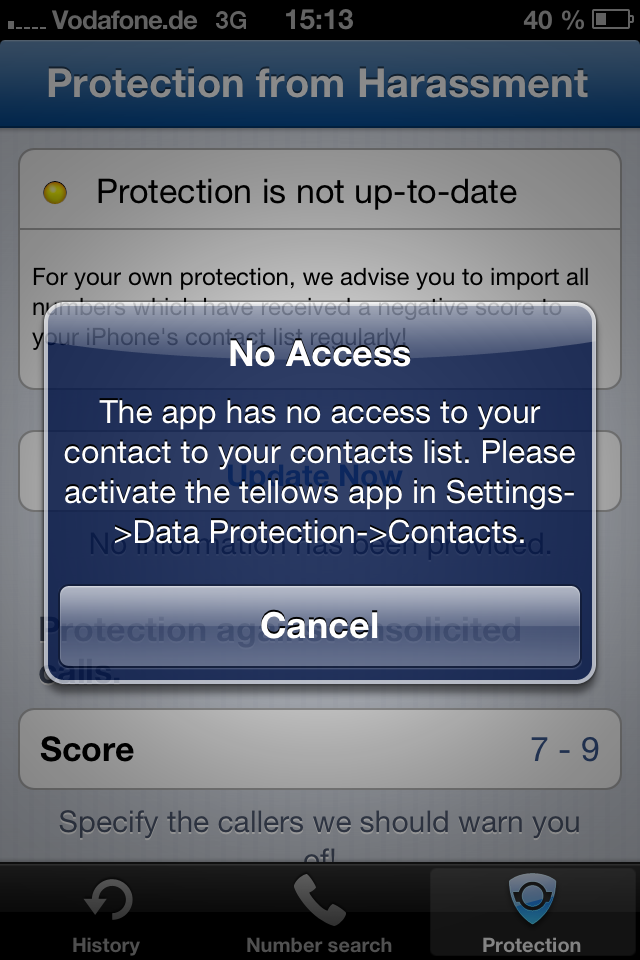 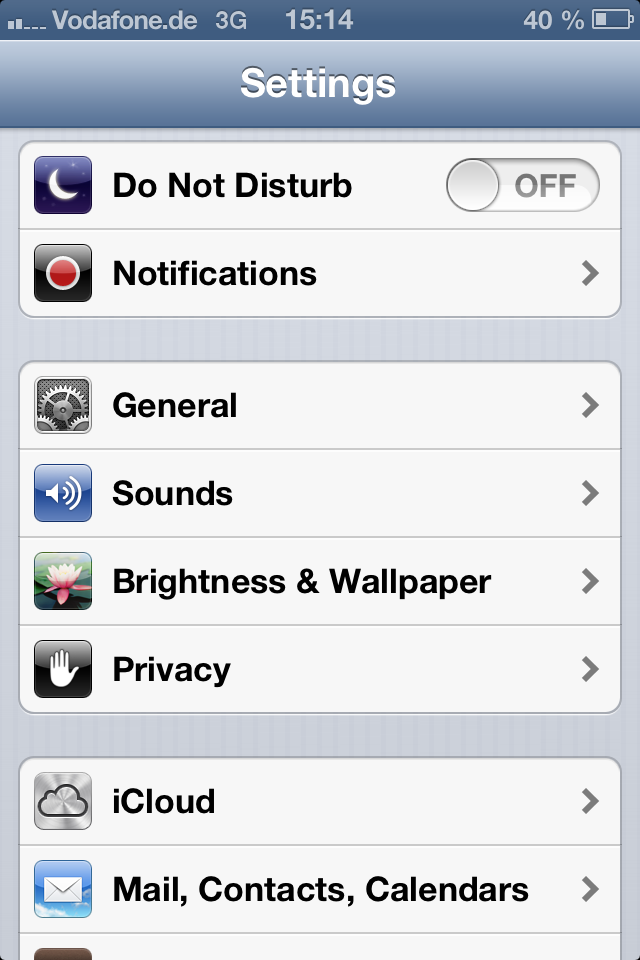 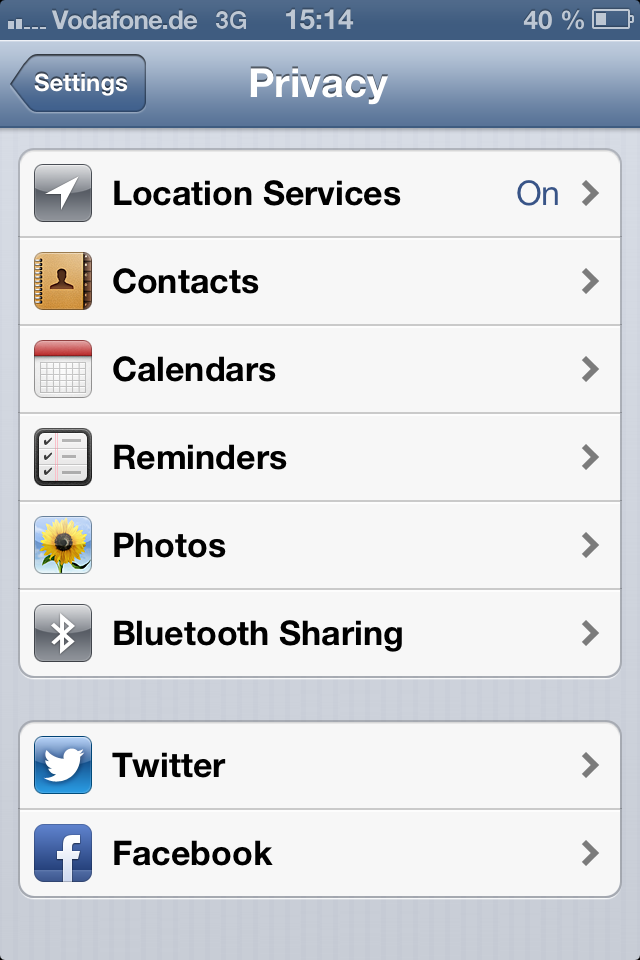 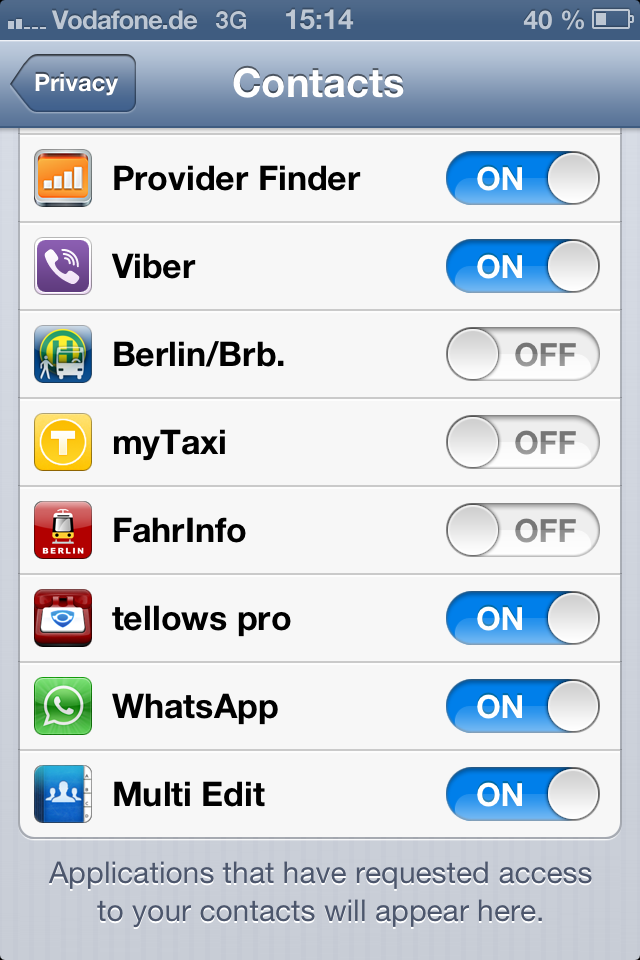 The app is now allowed to add the score lists to your contacts.

Issue: The tellwso pro caller recognition app is unable to add the tellows score lists (negatively rated) to your contacts.
In this case you probably use only Exchange-Accounts to synchronize your contacts and never enabled neither iCloud nor t your local iPhone contact list.

Background: The tellows app imports the score lists with negatively rated numbers and adds 3 new contacts by the name of „tellows Score X“ (X equals the score of 7 – 9). There are known issues when importing the score lists using certain Exchange-Servers (i.e. Google) since they can attribute only a small amount of phone numbers to the contacts.

There are two ways to resolve this issue:

1.Solution
To successfully import the lists the local contacts list of your iPhone needs to be addressed manually (the tellows app does not have access to your contacts list). To achieve this, you have temporalily disable the Exchange-servers and add a „dummy“ contact. The screens below offer further information on the procedure. 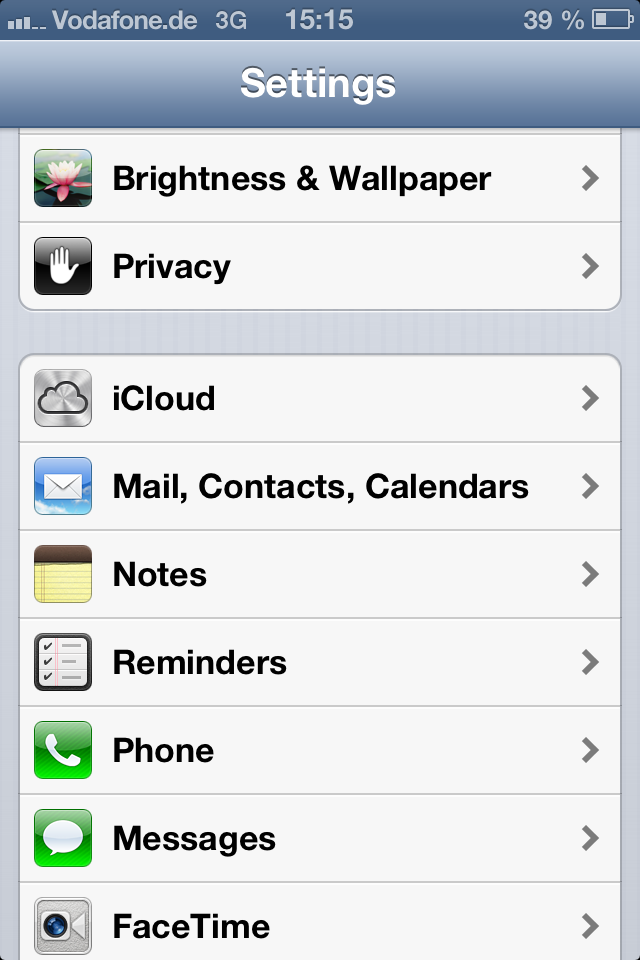 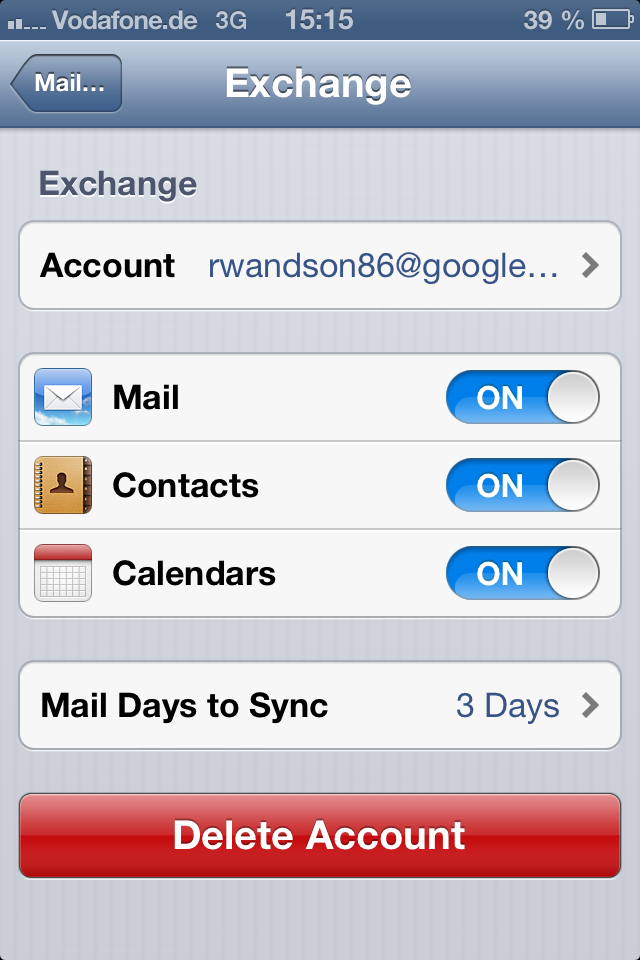 3. Delete any contacts from the phone to avoid duplicate entries 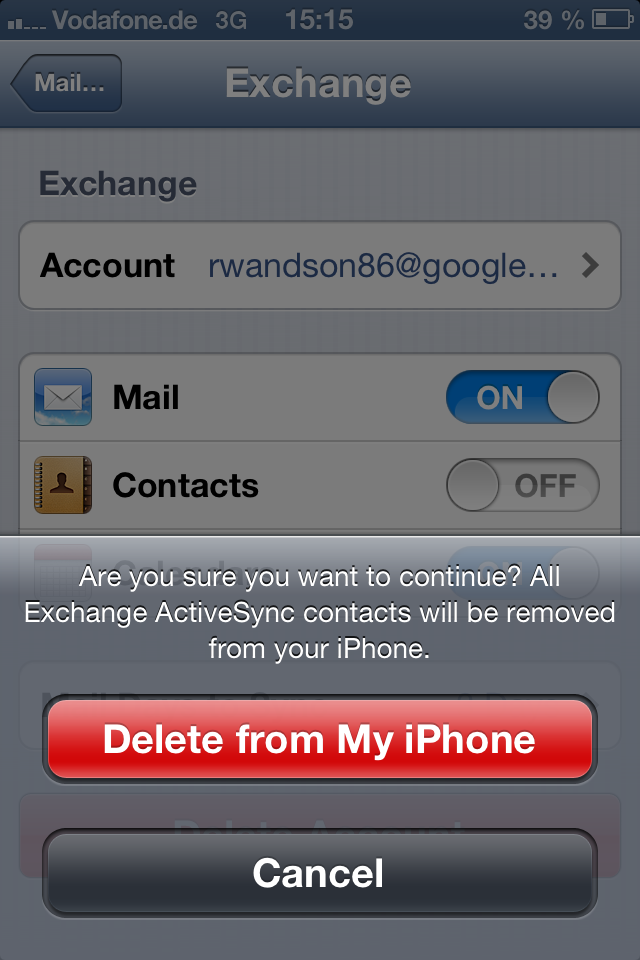 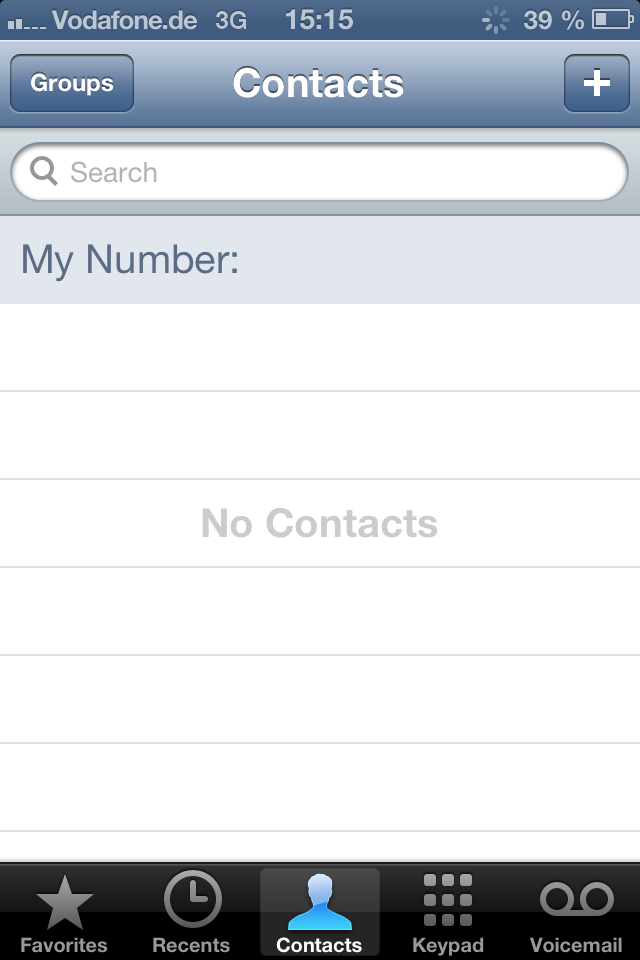 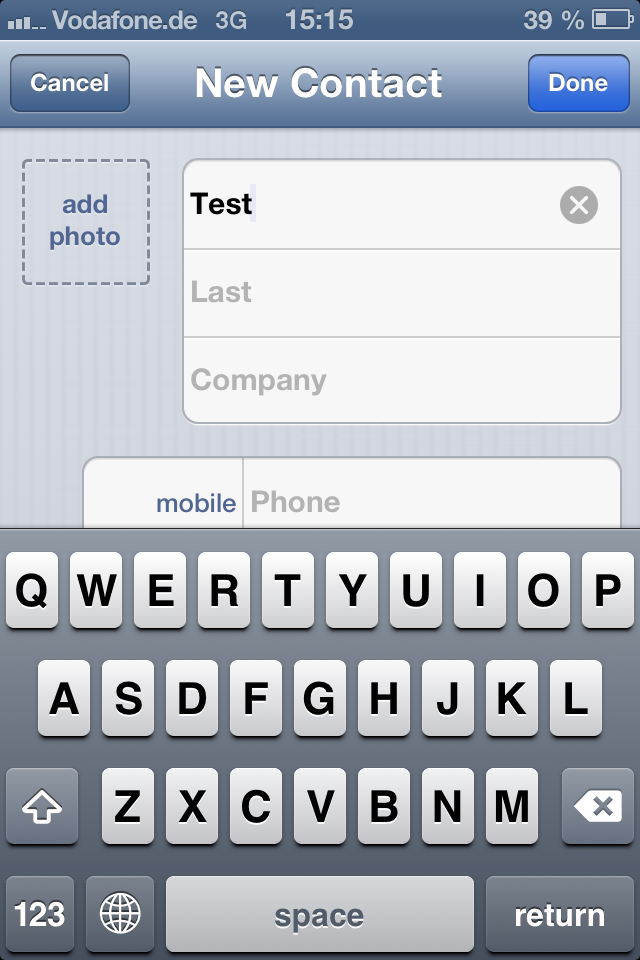 6. Enable contact synchronization of Exchange-servers and keep created contacts on the phone 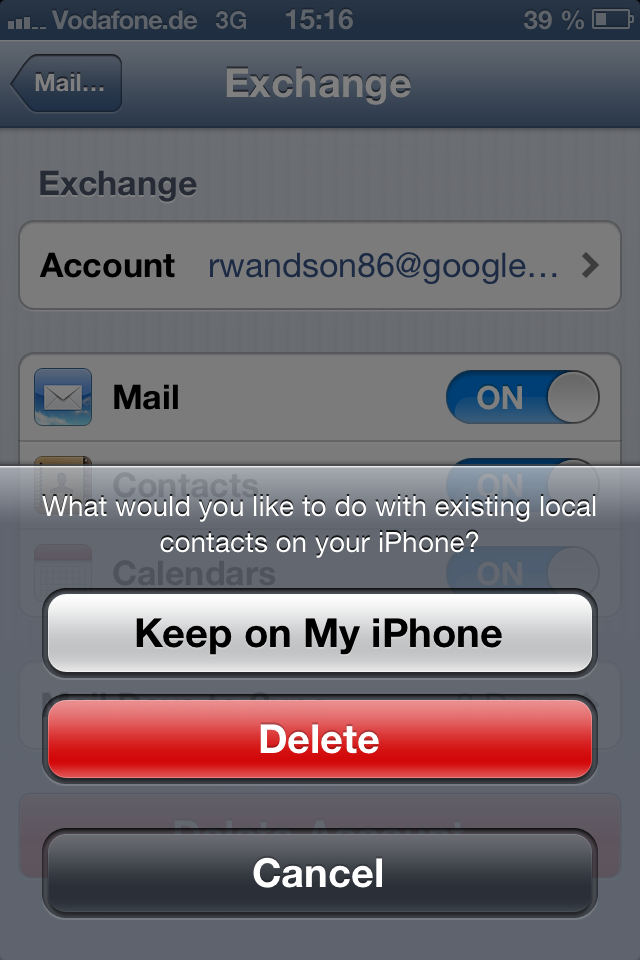 7. The groups overview now shows the group "On my iPhone" in which the tellows score lists are saved 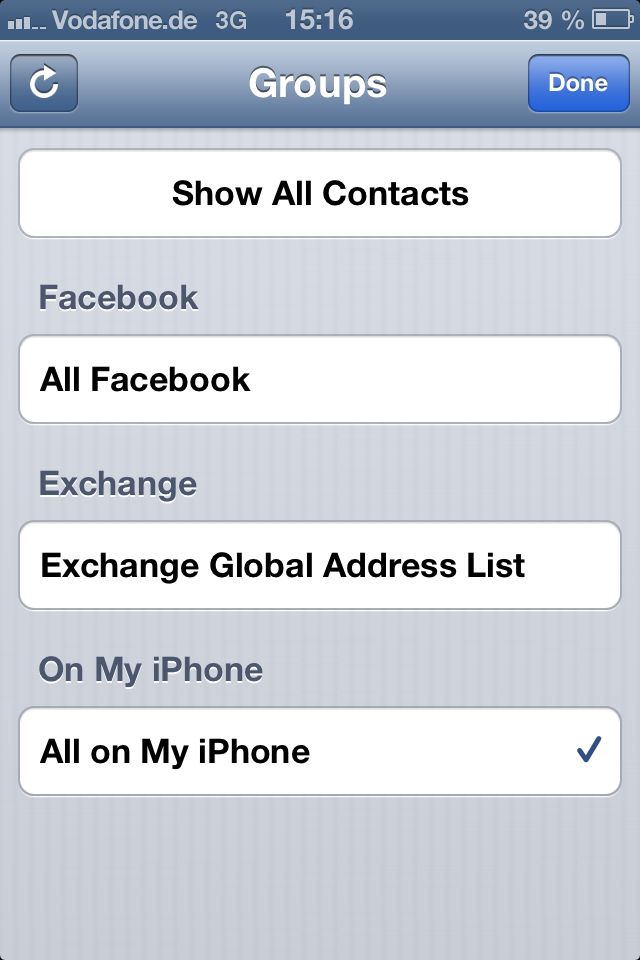 2.Solution
Apple’s iCloud service provides an additional way for the contact synchronization which also supports multiple numbers per contact. The activation of the iCloud synchronization solves the issue as well and, therewith, allows the tellows app to import negatively rated numbers.
The standard account for maintaining your contacts (create / edit / delete) stays untouched.

Below you will find some examples of known app errors and their solution.

–>Although tellows has information about lots of phone numbers, some spam calls may still slip through the net. If you receive a spam call, leave a comment on the number and this information will help us expand our database so that we can help others protect themselves from the same caller!

–>Unfortunately, this is a bug from Apple for all Caller ID apps. Apple suggests a workaround: If the iPhone won’t let you activate the app, you should wait at least 1 hour before you try to open the settings again. The app should finally appear in the menu option. This may take between 1-3 days, so we suggest you try to enable it from time to time. You should also restart your phone and try to enable the app again. If this does not work, check that your screen setting are appropriate, as this can block the app from being listed and please try to reinstall the app and restart your phone

–>Buy it through the app, nothing else is required! Your app status updates automatically from lite to pro

–>When you rate a number negatively it will be blocked on your device. Make sure, you activated the block feature in the app settings. You can find your local scorelist in settings

–>This feature requires premium. On the settings page, use the section: “Block incoming calls by local scorelist” to select which calls you would like to block. If you have premium, all calls from numbers with scores above the one selected will be blocked (e.g. score 8 and above).

There are many more answered questions in at our support page, check it out! If you cannot find what you are searching for, you can always use our contact form on the FAQ Website.